Why Choose IB? A Languages Perspective

August 7, 2012 · by scarboroughcollegeblog · in Languages MfL · Leave a comment

With the credibility of A-levels recently being brought into question in the media, there has never been a better time to choose the IB at sixth form level.  Here, Scarborough College’s Modern Languages department discuss the relative merits of studying a language at IB.

For the IB everyone has to do a language at one of three levels – Higher or Standard for those who have reached a good standard at GCSE and are ready to extend their linguistic talents further, and Ab Initio for those who want to take up a new language from scratch. Each is challenging in a different way. Keen linguists can study two languages, maybe even at different levels. Unlike A level there is no exam to disrupt studies half way through, giving students time to develop their  fluency alongside their knowledge of grammar, vocabulary, and culture. Also, the work is a little less prescriptive than A level, allowing time to increase general fluency, rather than merely prescribed topics. There is no Listening test at IB as it is examined within the Speaking test which is only 10 minutes long whereas it is 15 minutes at A level.

Most of our students would not have continued with a Modern Language beyond GCSE if following the A level route, but many have gone on to include a language in some capacity at degree level, even spending time in those countries (or further afield) as part of their courses. Depending on the level chosen IB languages are a good preparation for degrees in MFL or as part of another degree with language modules, Business, for example. One of our previous Heads of School, Helen Precious, is at present studying in South Korea, having spent four months earlier in Lyon, France. Studying a language at IB gave her the courage to carry on at University and to venture abroad for her third year. Oral presentations, media awareness  and the ability to produce a reasoned argument all help to prepare IB students for University life, as well as bringing about greater cultural awareness as they meet a wide range of people from very different backgrounds to their own. 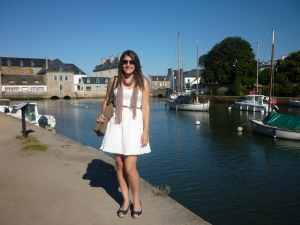 IB students are very focussed on a wide range of subjects and MFL certainly visits most of the other subjects depending on the interests of each new group and the optional topics covered. The Second World War looks very different from a French perspective, environmental damage and the controversy surrounding nuclear energy is of great interest to the German students and no study of Spanish culture would be complete without a peep at Picasso and his links to the Spanish Civil war. Our International students also bring their different perspectives to our studies too. TOK (Theory of Knowledge) is embedded throughout the course. 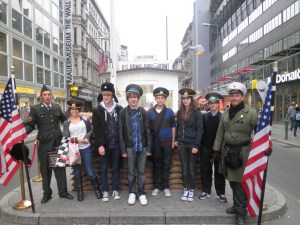 For the first examination in 2013, coursework has been introduced. At Higher level this is a creative piece based on a work of literature in the target language, at Standard level a piece based on the core topics of Social  Relationships, Media and Communications or Global Issues, and at Ab Initio level is a comparison of a cultural aspect between the target language country and their own. Studying a foreign language is a good way to hone literacy skills in a student’s native tongue too.

Alongside classroom study, students have a chance to practise what they have learned in the classroom by visiting our exchange schools in Berlin, Bilbao and Paris. Whilst often initially viewed as a big challenge ( MFL Staff see it more as a mini gap year) our students have been very pleasantly surprise to find that their partners have just the same interests and concerns as they do.

MFL love the IB and the excitement of seeing and helping our students rise to new challenges. We like to think we play our part in developing international students for an International World!

Here are some of our 6th formers back in October 2010 enjoying the Paris Exchange.  From left to right, Jack (far left) is currently studying French & Business at Newcastle, Stephen is studying Medicine at Newcastle, Emma studies Events Management at Sheffield Hallam and last but by no means least, Beth (right) is going on to study French & Philosophy at Oxford University 2012 after achieving 42 points out of a possible 45 at IB.  Do check out our board in the Dining Room at school which displays our very high IB points scorers!